The Real Cats of Neko Atsume

Last weekend I took a short holiday to San Diego, where I saw my mother give a demonstration of her Nantucket lightship basketry at the excellent Mingei International Museum. It was a wonderful celebration of a historic tradition, yet it was the discovery of a thoroughly modern phenomenon that my family can’t stop talking about. That phenomenon is the cell phone game Neko Atsume: Kitty Collector.

Created in Japan by developer Yutaka Takasaki, the game — and I use this term loosely — consists solely of arranging various digital feline attractants (yarn, scratching posts, food) in a virtual yard and then waiting for a collection of illustrated cats perched on cute pudgy legs to arrive and enjoy your assemblage. The cats come and go in a haphazard manner, resting on the cushions you’ve so kindly provided, playing with the toys you’ve left out, or cleaning their bowls of cyber kibble (though you never see them in the actual act of eating). When the cats depart, they thank you by leaving an assortment of silver or gold fish, a kind of currency you can use to expand the kind and quantity of cat lures your yard contains — or even the yard itself.

Along the way, the committed collector will take pictures of each cat who visits (and who they manage to see) for their “catbook.” If a cat comes enough times, he or she will eventually befriend the collector by leaving a strange, entirely useless offering. These, too, must be collected, one from each of the 49 cats in the game, from the outgoing and friendly to the reclusive and rare (I’m talking to you, Peaches). 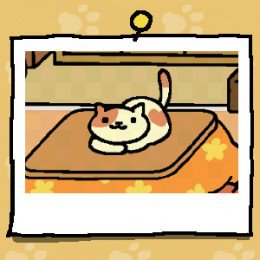 And that, as they say, is that.

But despite its rather limited scope, my whole family is completely addicted. We go to bed hoping for visits from the likes of Mr. Meowgi or Chairman Meow, Joe di Meowgio or Lady Meow Meow, or even the rather prosperous Tubbs, and we wake each morning eager to see who has stopped by and how much they’ve left us.

I found the game through an article in The New York Times Magazine, whose author Ryan Bradley was musing over why he was so obsessed with what is essentially a non-game. Bradley wonders if it’s the adorable kawaii aesthetics that so appeal to our western eye. He discusses the painter named Fujita who specialized in painting cats and excelled at capturing their rather indifferent attitude toward the rest of us. (His Book of Cats is, according to Wikipedia, one of the top 500 rare books ever sold.) And ends up deciding that the most intriguing thing about Neko Atsume: Kitty Collector is that the felines in the game are as unknowable, unpredictable, and flighty as the real thing. And because of this, their presence in our yards is an utter delight.

Only it is so NOT just like interacting with real cats!

For Neko Atsume to be real, the food options would have to be a great deal more vast (I’m thinking hundreds of different kinds of food to choose from instead of the rather paltry 7 the game offers) and the individual tastes of each cat much more particular. Finding each cat’s favorite would involve a huge degree of expensive trial and error — and even if a favorite were to be found, it would likely be abandoned by the fickle feline just after you returned from the virtual Costco with several cases of it.

For it to be real there would have to be litter boxes and yards to keep clean. Failure to do so would result in some sort of cat-brandished punishment, like a prominent scratch down the front of your newly recovered sofa or the “accidental” dismemberment of your child’s favorite plush toy.

Speaking of toys, you can go ahead and buy the ones designed for the cats if you want to, but if you truly want to attract felines, better just to leave your closet door open during the daytime, with all your cashmere sweaters and silky scarves stacked neatly on the shelves. Don’t worry which shelf; the cat will find it and make good use of its buttery soft, wonderfully fluttery payload. Or alternately you could set out a tray of fine jewelry — cats can practice their knot-tying with your dainty chains or their soccer moves with your rounder baubles — or a vase of delicate flowers to bat at in the breeze. Doesn’t shattering glass just make the most delightful sound?

And the mementos — those digital offerings of friendship that serve as each cat’s signature in Neko Atsume — would have to be radically different. What cat leaves a flowered collar or a handful of seeds on the porch of their favorite person? More likely offerings would include grass-strewn vomit, mass quantities of fur, and for the truly special, a dead animal. These would vary in size and species depending on the relative status of the yard owner, the pluck and skill of the cat doing the offering, and the season.

The winner of The Real Cats of Neko Atsume would be crowned “Cat Lady” (a title applicable to all genders) and awarded a lifetime’s supply of lint rollers, which of course will never be used, because as everyone knows Cat Ladies prefer to spend their evenings curled up on their frayed couches with felines by their sides, the latter basking in their own furry pleasure while kneading the Cat Lady’s thighs and purring at top volume, forcing the Cat Lady to enjoy the dulcet tones of the latest adaptation of Jane Eyre (excellent, by the way) at top volume.

Although truth be told, I may already be playing it.